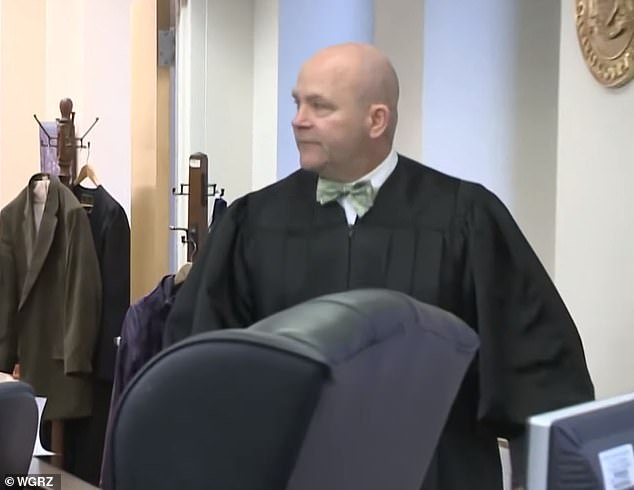 John L. Michalski, 61, was found dead at his home near Buffalo on Tuesday morning, his attorney said. The circumstances of his death remain unclear.

Authorities raided Michalski’s home on March 24. Law enforcement sources told The Buffalo News they were looking for evidence of tax crimes and various other state agencies were investigating his professional and personal conduct.

Michalski attempted suicide last February by lying on train tracks in the middle of the night. He was hit by a freight train but survived with a serious leg injury.

This suicide attempt took place on the same day that his friend and strip club owner Peter Gerace Jr. was arrested in Florida for conspiracy to commit sex trafficking, maintaining a premise involving drugs and bribery of a federal drug enforcement officer.

Michalski had known Gerace for decades and had done legal work for him. In 2006, he wrote a letter to a federal judge asking for a lighter sentence for Gerace after he was convicted of wire fraud in a telemarketing business.

The judge was appointed as an acting judge of the state Supreme Court in 2006. He earned $210,900 a year, according to a state salary database.

Michalski’s death comes days after state and federal authorities raided the home of him and his wife Susan (right) looking for ‘evidence of tax crimes’.

The March 24 raid (above) came as charges progressed against his ‘very close’ friend Peter Gerace Jr., a strip club owner with alleged ties to the mob

“It’s hard to explain how tragic this is,” said Terrence Connors, Michalski’s attorney and friend. He told the New York Times that “it would be hard to find a more respected judge” in the local legal community.

Michalski’s suicide is likely to spark further questions about his connection to Gerace and whether he helped the strip club owner commit one of the many crimes he is accused of.

Michalski has never been charged with a crime.

Authorities were seen loading boxes of documents into a black SUV outside Michalski’s home in Amherst, a Buffalo suburb, late last month.

Connors, his attorney, says Michalski told authorities he knew nothing of Gerace’s alleged crimes and would have cooperated. He said investigators were focusing on an online consignment business run by his wife Susan.

The business appears to be an eBay store called Everydaydeals364.

Susan’s attorney, however, told the Buffalo News that officers were “looking for information on the judge and his wife.”

A law enforcement official told the newspaper: ‘They were looking for evidence of tax crimes. You now have criminal investigations, both federal and state, involving the FBI, the US Attorney, the State Attorney General’s Office, and the State Police.

“They are looking to see if there was any income from the business that should have been reported,” the official said.

The raid and suicide comes as the case against the judge’s longtime friend, Peter Gerace, continues to move forward in the Western District of New York.

Gerace was arraigned in the U.S. District Court in Fort Lauderdale and charged with one count each of bribery of a public official, conspiracy to defraud the United States, maintaining a local involved in drugs, conspiracy to distribute controlled substances and conspiracy to commit sex trafficking.

Authorities were seen loading boxes of documents into a black SUV outside Michalski’s home in Amherst, a suburb of Buffalo, late last month

Gerace, Michalski’s friend, is the owner of the Pharaoh’s strip club near Buffalo. “There was just a lot of drug dealing and a lot of dancers using drugs,” his ex-wife said of the club

Judge Michalski, who earned $210,900 a year, attempted suicide after Gerace was charged last year. He lied on train tracks near Buffalo but survived with a badly injured leg. He then took time off, returning to the bench in January

Gerace is the nephew of Joseph A. Todaro, whom the FBI has accused of running the Buffalo Mafia, according to WKBW.

He is the owner of Pharaoh’s Gentlemen’s Club in Cheektowaga, near Buffalo.

He was tapped on the shoulder by Homeland Security Investigations while trying to check into a South Florida hotel last year, according to the Sun-Sentinel.

“I was going to check in, but they checked me out,” he told a judge.

He was accused of paying Drug Enforcement Administration agent Joseph Bongiovanni “to shield (the strip club) from federal narcotics investigations.” Prosecutors allege Gerace used the business to “facilitate prostitution…and (the) use and distribution of controlled substances,” according to an indictment obtained by WGRZ.

Agent Bongiovanni was charged in 2019.

Prosecutors say that between 2008 and 2017, the DEA agent “provided information about the investigations, including the status of specific investigative techniques, potential witnesses, and confidential sources in routine recurring meetings with drug dealers who paid him bribes”.

Michalski attempted suicide by lying on train tracks on February 28, 2021, the same day Gerace was arrested and charged. The judge took a leave of absence and returned to work in January, returning to a full caseload.

His belongings were reassigned last month after the raid on his home.

Katrina Nigro was married to Gerage for four years. Their marriage was celebrated by Judge Michalski.

“There was just a lot of drug dealing and a lot of dancers doing drugs,” she said of Gerace’s strip club.

Katrina Nigro was married to Gerage for four years. Their marriage was celebrated by Judge Michalski. “He was very close to Peter,” she said of Judge last year

Judge Michalski recused himself from a car accident case involving Gerace in 2019 due to the couple’s relationship. Michalski, who was found dead of an apparent suicide on Tuesday, was being investigated by multiple state and federal agencies at the time of his death.

She worked there before marrying Gerace. “Before I was with him, I had an indoor adult store and worked there. I did everything there, bartender, waitress… like anything to cover. However, I never danced there,’ she told WGRZ.

On Facebook, she posted messages saying, “(Gerace) paid off the police” and called her an ex “drug dealer (and) sex dealer”.

Nigro and Gerace were married in a ceremony presided over by Judge Michalski, who took his own life on Tuesday.

“He was very close to Peter,” she said of Judge last year. “I went to dinner several times with him and his wife.”

In 2019, Michalski recused himself from a car accident case involving Gerace after his friend had a first appearance before him, according to WGRZ.

Apart from the search of his home last month, the purpose of which has not been officially confirmed, Judge Michalski was the subject of two different investigations.

The state attorney general’s office was examining him for possible corruption, according to The New York Times. No charge had been brought against him.

His professional conduct and mental health during and after his last suicide attempt were also reviewed by the state Commission on Judicial Conduct.