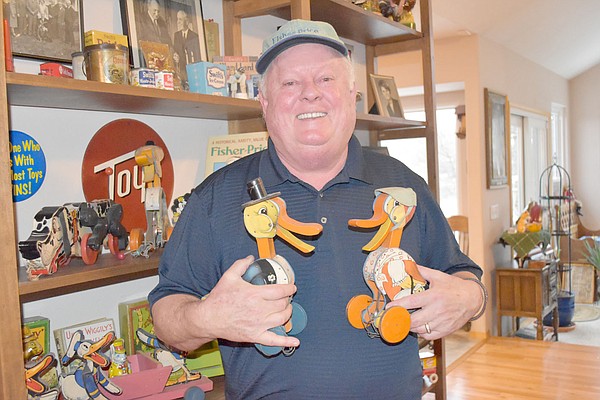 During his 31-year career with Fisher-Price, Bruce Fox accomplished many things, including two Lifetime Achievement Awards.

Its history dates back to 1972, when he graduated from college. He couldn’t find a job and the economy was tight, he said, so he searched the Yellow Pages for a company that could hire. He ended up with a job in retail at the Woolco department store in Houston. He worked there for six years, rising through the ranks to become Deputy Managing Director in charge of advertising for six toy, record and book stores. He liked to work with toys.

Fisher-Price was growing rapidly at the time and he loved their products. He had a good relationship with the sales rep, who ended up offering him a job.

“Retailing was tough, so I couldn’t wait,” he says.

He had four interviews because the sales jobs for Fisher-Price were very exclusive, he says.

“They liked me very much. I never thought I would be a salesperson, but I became a really good salesperson… because I understood what the buyer was going through on the other side of the office.”

He began his career with Fisher-Price in 1978, and in 1980 he was named Seller of the Year. He was promoted that year, moving to Philadelphia, to be in charge of the company’s second and third largest accounts.

In 1984 he started what would become a huge toy collection, with 500 Fisher-Price collectible toys dating from 1931 to 1965. He bought his first piece from an antique dealer for $ 1.20. Then he went to the head office and made copies of all the past toy catalogs and made a filing cabinet. In no time, he had 100, then 200 toys in his collection. In 1985, he was asked to speak about his collection at the company’s Silver Dollar Club.

He created a slide show, showing toys from 1931 to 1965 and different eras of the company. He was very well received by the Silver Dollar Club. Then in 1986 the general manager told Fox that there would be a national sales meeting, and they wanted him to be the speaker. He doubled the amount of material in the presentation he gave to the Silver Dollar Club. Following this presentation, the general manager suggested that she write a book. He would later present the slideshow more than two dozen times to groups, historic companies, corporate factories, and Fisher-Price University, to which all the people who sold Fisher-Price overseas. attended the East Aurora, NY head office to learn more about the company.

Fox teamed up with John Murray, a color expert in charge of toy plastic paint, and together they wrote a book on the history of Fisher-Price from its beginnings in 1931 until 1963. He has was published in 1987.

In 1989, Kmart was growing up and Fox moved to Detroit to work with Kmart. He introduced Best Products, a line of baby products, at Kmart in 1984. Fisher-Price invented the baby monitor, and it was on sale in the Kmart toy department. Fox convinced the toy department to let him move the baby monitors to the babies department, and they sold 10 times as many that way and opened the door to sell other Fisher-Price baby items such as car seats and high chairs. In 1990, Fisher-Price received the largest order for childcare products (baby items) it had ever received.

In 1994, Mattel bought Fisher-Price, which attracted more people and more toy categories. Then, in 1997, Mattel bought Tyco Preschool, which made licensed toys like Winnie the Pooh, Sesame Street, Blue’s Clues, and others. With this expansion, the company became Fisher-Price Brands and needed a new business manager. Fox took on this role.

He moved to the home office in New York for five years. He was in charge of online companies including warehouse clubs and Viewmaster. He met an online startup called Amazon.com.

After five years, the company’s vice president was promoted to work with Walmart and asked Fox to move to Bentonville. In early 2003, Fox moved to Bentonville to be in charge of Fisher-Price’s Walmart office and remained there until his retirement in early 2009.

“It has been a very rewarding career,” he says. “I couldn’t have written a better script for a career.”

This year in July, he spent six weeks as a consultant selecting toys from the Fisher-Price Toy Museum on Instagram in honor of the company’s 90th anniversary. He chose 16 toys from each decade. Nine decades of toys can be viewed on Instagram at the Fisher-Price Toy Museum. Fox was also recently on “CBS Sunday Morning” for the 90th anniversary on December 20.

Today is the last day to see an exhibit of some of the Bruce Fox collection at the Bella Vista Historical Museum. The hours are from 1 p.m. to 5 p.m. and admission is free. Information: (479) 855-2335.