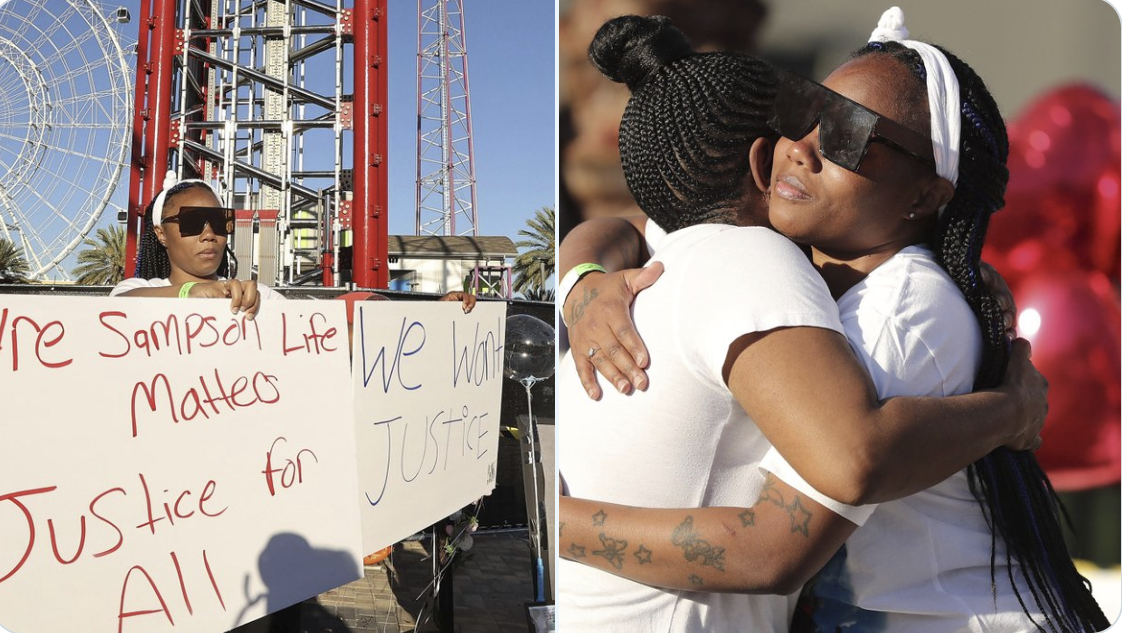 The woman who identified herself as “Shay Johnsonthe cousin of Tyree Sampson, the 14-year-old from Missouri, who plunged to his death while riding the Free Fall Drop Tower at Icon Park in Orlando with his football teammates, is not related to a teenager according to his family, reports the Orlando Sentinel.

The Orlando Sentinel discovered the true identity of “Johnson”, his legal name is Lewishena Lavonia Browning32 years old. She marched in front of the media giving an interview on behalf of Sampson’s family, hugging supporters, signing petitions and leading a vigil outside the Free Fall ride, WFTV-Channel 9 reports.

Lewishena Browning has given interviews, spoken at press conferences and marched with signs calling for justice for Tyre, who died in the Orlando Free Fall race last week. Now the teenager’s family are warning that she is not who she claimed to be. https://t.co/kZWbVXxtZg pic.twitter.com/SuIPtyWb6a

In a news interview, Browning wore sunglasses looking distraught as she recounted the final moments leading up to the teenager witnessing the ride that would be a fabrication.

After tonight’s vigil for #TyreSampsonhis cousin Shay described her last conversation she had with the 14-year-old before he fell from the ICON Park ride. @MyNews13 pic.twitter.com/hTpyR7sv5h

Tyre’s mother spoke to the Orange County Sheriff’s Office and told detectives that “she doesn’t know who Shay Johnson is,” said Michael Guido, the sheriff’s spokesman. Lawyers representing the family said none of the family members claimed to know Browning.

Browning’s employer, Flash Dancers, fired her from the adult entertainment club once her deception was discovered.

“I feel bad about it,” said Guillaume Sierer during a telephone interview with the Orlando Sentinel.

Sierer said that in her employment, the Browning was called “Shay” when she worked at the club, but Lewishena Browning is the name the establishment has registered.

Criminal records show Browning has been arrested four times in Orange County for domestic violence and driving with a suspended or revoked license, according to the Orlando Sentinel.

She is currently awaiting trial for arson and criminal mischief for setting a car on fire in August, based on court records, Orlando Sentinel reports.